Here are the cheapest airfare deals to Wellington. View Flights to New Zealand

Wellington is New Zealand's capital and second-largest city, and also just happens to be one of the first places on the planet to catch the morning sun. Perched on the southern tip of North Island beside the Cook Straight, this small-scale gem set amid a ring of forested hills has a glittering harbour with a waterfront promenade running along the bay, a rugged and picturesque coastline, glorious sandy beaches, and clusters of timbered houses cascading down its wooded hillsides.

Undoubtedly one of New Zealand's prettiest locations, visitors will enjoy panoramic views across the city, waterfront and ocean as they ride on Wellington's historic, pillar-box red cable car up to Kelburn Lookout. Once at the summit, tourists will find they have arrived at Wellington Botanic Gardens, a verdant paradise with walking trails, an observatory, and 300 varieties of roses. Also close to the city, Zealandia highlights New Zealand's natural history and harbours many rare species. Those happy to sign up for a Zealandia guided night tour will spot the rare nocturnal kiwi, the nation's iconic flightless bird, and most nature lovers will also want to visit Matiu Island, a spectacular wildlife haven in Wellington's offshore waters.

The compact city itself nestles around the waterfront. Here visitors can explore the sensational Te Papa national museum, delve into local history in the Wellington City & Sea museum, or enjoy the contemporary art exhibitions in the City Gallery. When the time for refreshment arrives, Wellington's famous café culture offers a host of stylish options, and copious supplies of quality craft beers are also available throughout the city.

Wellington hosts a variety of colourful festivals and annual events, some of which draw an international audience. These include the World Series Rugby Sevens in January; the New Zealand Festival (art, performance and music) in February/March; Wellington on a Plate (an international foodie extravaganza) and Beervana (just guess!) both occurring in August.

Climate-wise, Wellington's weather is mild and temperate with summer temperatures averaging 17-20º C between October and April. This is undoubtedly the best time to visit because Wellington's relatively short winter season is generally accompanied by strong winds roaring across the Cook Straight, earning the city the tag 'Windy Wellington'. 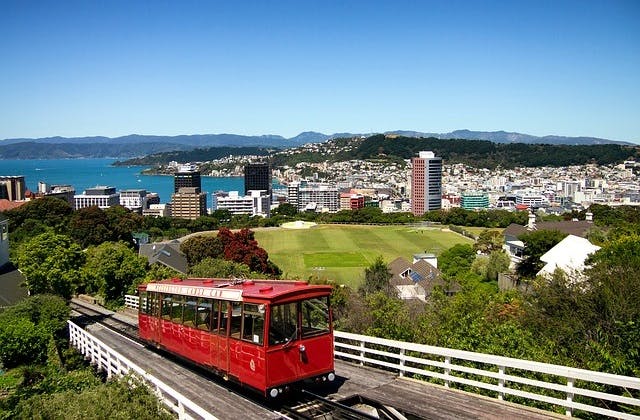 What airlines fly direct to Wellington from Madrid?

No airlines fly non-stop between Madrid and Wellington.

What is the best airline to fly to Wellington from Madrid?

The best airline to fly between Madrid and Wellington is Qantas Airways.

What people are saying about Wellington right now:

Airlines that fly to Wellington :